Bridgwater Labour Party Lotto Club has paid out £100 to its first winner ! 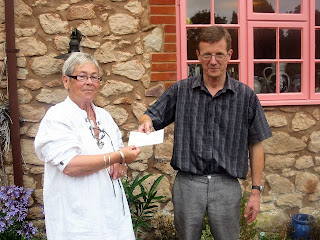 Kate O’Byrne of Over Stowey is the holder of number 19 – which was the bonus ball in the first Saturday Lotto draw of August. The attached picture shows her receiving her cheque for £100.
The Lotto Club now has 41 members and will be a valuable source of funds for the Party. All the profits go straight to our new Campaign Fund, to be spent on political campaigning.
The chance to win £100 costs just £4 a month. To join, contact me. If you’re already a member – you could be the next winner. Good luck!
Andy Lewis
CLP treasurer
westsomersetlabour@hotmail.co.uk
Posted by Sedgemoor Labour at 01:16 No comments:

A Community Scrutiny Committee of Sedgemoor District Council met on August 10 to examine in detail the decision by EDF Energy not to recommend a Bridgwater Bypass as part of the development proposals for the new Hinkley Point C Power Station.
The meeting was arranged following the presentation of a 1400 name petition to the council saying that EDF Energy should not be allowed to start work on the new plant until a bypass had been built to relieve congestion in Bridgwater. As a result of the meeting EDF  will be asked to submit a report to the Infrastructure Planning Commission on the local impact of the proposed development.

Held in the YMCA, Friarn Street, the all-day meeting which was chaired by Labour Councillor Julian Taylor (Eastover) was addressed by representatives of parish councils and wards as well as from EDF Energy. Following a session of questions and answers, councillors agreed to the following resolution:
"This committee recognises the overwhelming community support expressed at this meeting for a Northern Bridgwater by-pass. The Scrutiny committee urges EDF not to submit a Development Consent Application to the IPC until such time as EDF have robustly and comprehensively assessed traffic impact and means to mitigate it, including a truly comparative assessment of a Northern By-pass and online improvements, to the satisfaction of the Local Authorities. The assessment should align with the NATA/Webtag methodology stipulated in Department of Transport Guidance.
In the absence of this robust assessment of transport options by EDF, the Council should contribute financial and officer support to the completion of such a study working with the Highways Agency, Somerset County Council and West Somerset Council as appropriate.  It should be completed in the most comprehensive level of detail that can reasonably be achieved prior to the submission of a Development Consent Order application for Hinkley Point C.  It is recommended that this study should form the basis of a decision by the Council on highway matters, when the Council sets out its position to the Infrastructure Planning Commission in a Local Impact Report. This work should commence immediately."

Chairman Julian Taylor said " I am   pleased that local people from Bridgwater and the surrounding communities had the opportunity to speak in support of a sorely needed Northern  by-pass for Bridgwater.  I hope that EDF will recognise its duty of care towards the community and get on with providing a by-pass as soon as possible as part of the Hinkley Point development. "
Cllr Mick Lerry (Bridgwater Victoria) spoke forcibly at the meeting saying   "It  was clear from the presentation from EDF and Somerset County Council that the real assessment for a bypass had not been considered as an alternative to the proposed road junction alterations in Bridgwater,  because EDF refused to submit their proposals on the Bridgwater bypass to Somerset County Council and Sedgemoor District Council, instead they would only submit the bypass proposal to the Infrastructure Planning Commission. The people of Bridgwater were being denied  the opportunity to be consulted on the bypass, because of a policy decision made by EDF at head office level. Consequently a real traffic assessment has not been carried out."
Posted by Sedgemoor Labour at 02:25 No comments:

In the light of the recent demolition of the Colley Lane Drying sheds the question of Bridgwater's industrial and architectural heritage has been brought to  the publics attention following an angry letter from the Chairs of Bridgwater Forward Dave Chapple and Sally Jones in which they attack Sedgemoor District Council for 'Official vandalism".

In an angry letter to the Mercury, Dave and Sally write "When this letter is printed, Bridgwater’s last brickyard drying sheds will have been demolished: destroyed, that is, by official council vandalism masquerading as ‘planning permission.’ We refer to the distinctive long, low wooden-slatted sheds at the Pathfinder Terrace end of Colley Lane. These drying sheds, dating probably from the late 19th century, belonged to the firm of H J and C Major Ltd. The Colley Lane brick and tile makers, members of Ernie Bevin and Jimmie Boltz’ TGWU/Transport and General Workers Union, played their part in the town’s distinctive and often turbulent working-class history. On behalf of our campaign group Bridgwater Forward, we have to register our disgust and anger that such a vital link to our industrial past has been destroyed." 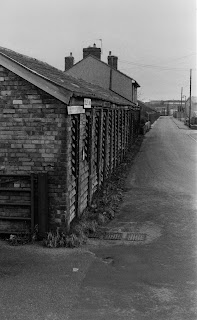 Dave Chapple added "Who is responsible? Have the decency to own up! Hang your heads in shame! Did those who voted to grant planning permission for demolition of the drying sheds for housing know anything of their history?Do any of these planning officials or councillors live in Bridgwater?"
Bridgwater Forward says that some nine months ago the Bridgwater Civic Society brought this matter to the council’s attention and that nothing was done.  They also say that there is also a possibility that some of Bridgwater’s oldest houses-(3-7 North St) may also be under threat.
Dave Chapple adds "If we were talking about a fine old country mansion in the Polden Hills, would there be this same distinct indifference? Vandals, if caught, may get punished, but how can Bridgwater people prevent such “official vandalism” by those who have a duty of care to preserve our town?"
Cllr Julian Taylor & Cllr Dave Loveridge (Labour Eastover) have been campaigning to try to save the Drying Sheds and are now calling for a 'Local List' in support of the Civic Society.
Cllr Taylor says " We have been trying to get this building listed for the last year The council have refused to introduce a local list.    Similarly with North Street.  The Local List was started when James White was conservation Officer in 2007, when he left the list was ‘lost’ .  The drying sheds are one of two remaining, the other is in the Drove . It's clear  the result is that we are losing our heritage for short term gain. The next to go could be  the Crypton building. "
Cllr Brian Smedley (Bridgwater Westover) , visiting the demolition site with members of Bridgwater Forward , supported Cllr Taylor's call for a Local List    "We should now  press to have this list so that the built environment heritage in Bridgwater is not lost to rapacious developers.  Because we do not havea local list we have lost these brick drying shedsand  next to go could be the  Art Deco Crypton Building  on Bristol Road,  and the 1930's cinema on Penel Orlieu   as well as the North street cottages. Why has there been no Conservation Area Appraisal in Bridgwater since the areas were first designated in the 1970s? Because it has not been seen to be a priority so maybe it is now time to make it one. I would urge groups such as the Town Council to get together with the Civic Society and Bridgwater Forward to make this campaign a reality"

Posted by Sedgemoor Labour at 04:42 No comments: